A Tribute to George Li

“Does it pass the sniff test?” 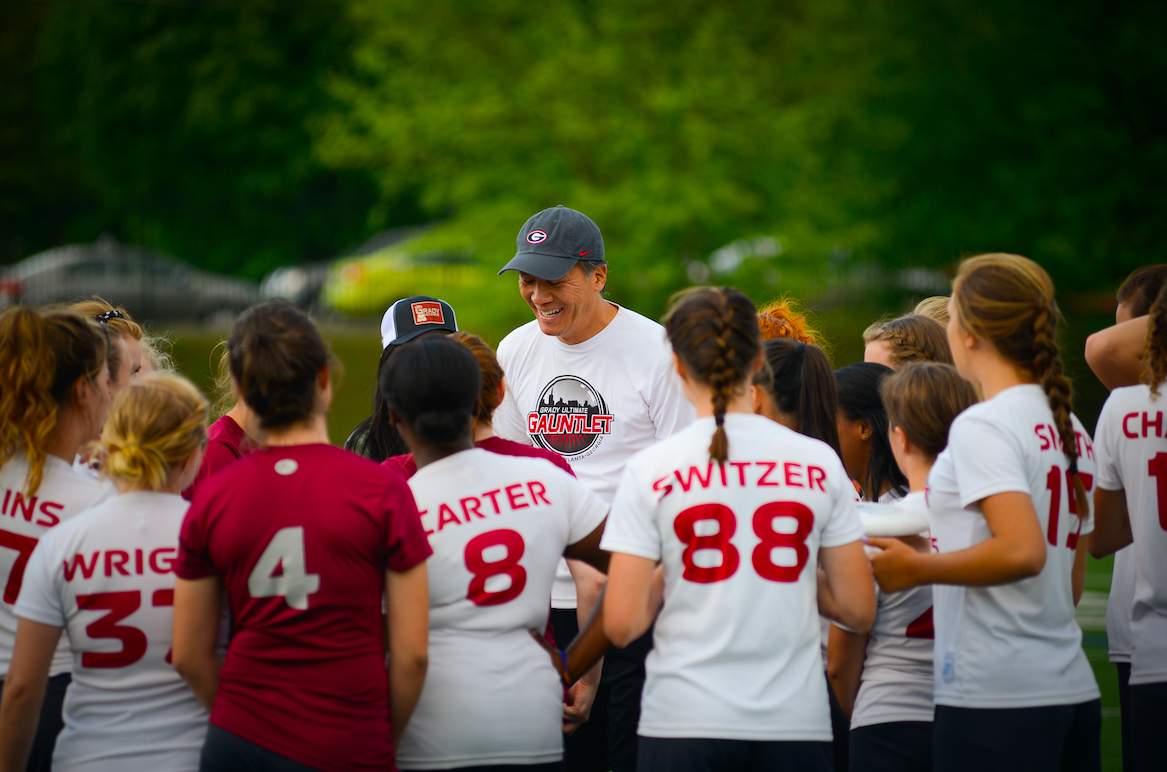 As Atlanta Youth Ultimate kicks off the 2019 season, many of you may have already heard that George Li, our longtime AFDC Juniors Director, has stepped down from the position. He intends to continue to play an important organizer and coach role in our community. He has handed over the reins for this pivotal position to Denise Koo, who has agreed to be our acting Director until elections are held in the fall.

We want to take this opportunity to express how incredibly grateful we are to George for the 20+ years of dedicated leadership and hands-on effort he has given to Atlanta Youth Ultimate. As a constant in the AFDC juniors community, George has acted as Juniors Director, volunteer extraordinaire, coach, mentor, and friend. Much of Ultimate’s growth among the youth in Atlanta can be attributed to the hard work of George. When George started there was fall high school league of just 35 kids, one high school Terminus tournament, and a coach-organized middle school and high school EOS tournament.

From elementary and middle school programs to AFDC juniors YCC groups, George has been involved in expanding the reach of the Atlanta frisbee community among the young, for all levels of play.

At the middle school level, George has been an advocate for both the boys’ and girls’ teams. During his time volunteering with AFDC juniors, he helped to expand the league with the most recent win resulting in an official EOS tournament for the five out of the seven girls teams. Additionally, he spent a few years coaching both the boys and girls team’s at Inman after Paddi White retired from coaching. He engineered the program at Inman both to give girls the opportunity to play as competitively as possible and to play in an all girls’ setting whenever possible, a rarity among Ultimate communities. He always focused on teaching new and returning players the fundamentals of Ultimate as a competitive sport, emphasizing fair play and the “Spirit of the Game” as the most important values.

George was a constant and approachable presence at both Inman Middle and Grady High School. Interest at the Middle School level has influenced the pipeline for Grady High School, which had a savage girls’ JV squad four years ago and this year has 25 players apiece on both the JV and Varsity teams. Some of the most talented players are those whom George has coached since 6th grade. “George has been so thoughtful about how to create an inclusive setting and I really love that he has been the entry point at which many of my players came to ultimate.” said Evelina Pierce, Grady HS girls’ ultimate coach.

Kim DiFrancesco, Grady parent, volunteer, and former AFDC Juniors board member noted “George was pivotal in helping to start the Layout Club at Grady High School in 2014.  It was formed when Grady’s coach and program manager moved to another school, thus requiring an administrative structure to support Grady High School Ultimate. In addition to ensuring a smooth transition for the program, George also stepped up to co-coach the Varsity Boys team that year.  George was awarded the Merc Award the following next year for all his contributions to Grady Ultimate.”

George with some of his family at a Grady Boy’s High School game (not pictured Phoebe, Haven and Tiger)

If you were at any of the juniors’ events in the last twenty years you undoubtedly crossed paths with George. YCC and current Maynard Jackson High School Coach Michael Boardman, reflects, “George has been a tireless and driving force in the growth of Atlanta Youth Ultimate.  I assume he does have a day job, but sometimes you wouldn’t guess it with the number of hours he has dedicated to the sport both on the field coaching and organizing as well as behind the computer making sure things run as smoothly as possible.”

Players like Izzy Pitman, AFDC Juniors outreach volunteer coach, Paideia ‘18,  cATlanta, Ultimate Peace CIT, and Yusuf Abdullah, Parkview High School ‘15, ATLiens ‘15, Freaks Uv Nature ‘16-18, Atlanta Hustle ‘16-18, who have grown up with George’s mentorship and friendship, were impacted by him on many levels as he helped build the structure that is reflected in our community today.

“I’ve known George since 7th grade and every time I see him, regardless of whether I’m on the field or not, he always comes up to me, gives me a high-five. I’ll always be grateful for his compassion and awareness for those around him. He is a friendly face on any sideline!” said Izzy Pitman.

“George gave me the opportunity to try new things out of my comfort zone, the encouragement to fail and try again, and the stage to showcase all the skills I have learned over the years through his guidance. If it wasn’t for George I would not be  playing at such a high level today, and in fact, I would not be playing ultimate at all. He’s helped me to be fostered within the Ultimate community and create some of the best friendships a man could ever ask for.” added Yusuf Abdullah.

For most of his tenure, AFDC Juniors was a volunteer-only organization, and George, as the director for 10 years, kept the lights on. Starting in 2013, George helped coordinate City of Atlanta summer camps and a team at Hope Hill to ensure that the Atlanta Youth Ultimate movement expanded its reach. Like many in our community, George believes that costs should not be a barrier to getting into the sport as it is one of the most accessible games to play. He prioritized outreach to girls’ programs and to underserved communities. George was tireless in his promotion of AFDC Grants so that kids could play ultimate at any level regardless of their ability to pay.

“During George’s years in service, AFDC Juniors was recognized several times by USA Ultimate for its growth and volunteer impact. George supports coaches, has the “cred” as a former player, and has the outlook of a parent, a professional, and a volunteer – valuing safety, program sustainability, and fun. He would be the first to credit the dedication of coaches and volunteers for AFDC Juniors’ success, yet George’s generosity over these years has been immeasurable.” said Helen Laseter, Paideia parent, volunteer, and former AFDC Juniors board member.

If you’ve been a volunteer at any of the Middle School, High School, YCC or general AFDC junior’s events you were most likely recruited by George.

Miranda Knowles said, “When I first moved to Atlanta, George invited me to help steer the direction of youth ultimate in Atlanta from my Seattle-developed perspective. He has always had a good sense for what is best and what would work in our community.”

“Given George’s passion, he took the time during the fall of 2017 to pull together and coach a group of 4th and 5th graders from Morningside and Cliff Valley. We had started a club for the same age group at Fernbank elementary and with George coaching Morningside/Cliff Valley we had an “end-of-season” game with the mashup team, in the rain on a cold December day. The game was THE highlight of the club for our Fernbank kids, many of whom went on to play on the winning Druid Hills Middle School team this past fall.” said Denise Koo Interim AFDC Juniors Director, team manager, and parent.

George and one of his daughters, Avery, during the 2018 inaugural rATLer’s season

Most recently, George has been coaching and recruiting for the rATLers. Atlanta’s first-ever U17 girls’ team to compete at the YCC tournament in Blaine, MN. The rATLers finished second in the Team Spirit Award rankings and fifth in the overall tournament, after being seeded last. “George does a great job balancing the desire to win with Spirit of the Game. All of the girls had an amazing experience and look forward to going back to Blaine this year.” says volunteer and parent, John Blackmon. George will not disappear from the youth ultimate scene, as he is continuing to coach the rATLers in the 2019 season. The team has started playing together already this year, competing at the University of Tennessee in February and they held tryouts earlier this month.

George, the AFDC juniors community has been privileged to have you among us and will be forever grateful for the impact you’ve had upon us. We all look forward to seeing your smiling face on the sidelines from time to time and thank you from the bottom of our hearts for your time, commitment, and tenacity in building this community.

Denise Koo has agreed to serve as Interim AFDC Juniors Director until the next AFDC-wide elections this fall, or until someone new agrees to run for the position, whichever comes first.  Persons interested in getting more involved in AFDC juniors as a volunteer should contact Denise directly denisetkoo@gmail.com or through juniors@afdc.com.